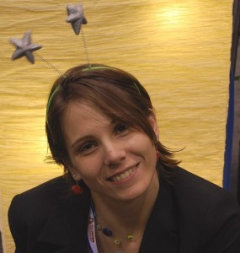 Ana Lucia Varbanescu is an assistant professor at University of Amsterdam, The Netherlands. She obtained her BSc and MSc from POLITEHNICA University of Bucharest, Romania. In 2010 she received her PhD from Delft University of Technology. She continued as a PostDoc researcher at VU University Amsterdam and Delft University of Technology, positions partially funded by a NWO IsFast grant. In 2012, she received a STW VENI grant. Since 2013, she is a MacGillavry fellow at University of Amsterdam. She is an active participant in the ASCI doctoral school, ICT.Open, and ICT with Industry. From 2007 till 2014, she was a visiting researcher at IBM T.J.Watson (USA), NVIDIA (USA), BSC (Spain), and Imperial College of London (UK). Her research interests include high performance computing, parallel programming, performance analysis and prediction, and big data analytics.